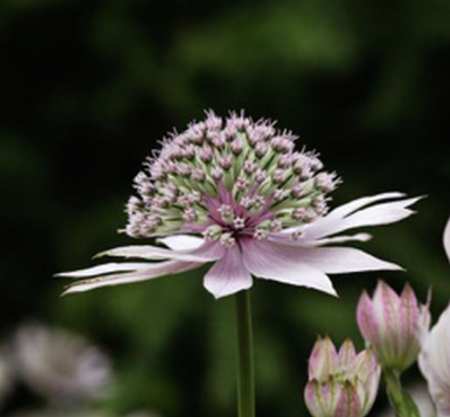 As part of the clinic's ongoing quality-assurance work, treatment results are summarized regularly. This information may be used as the basis of research published in scientific journals. All data included is, of course, completely anonymous and cannot be traced to single couples or individuals.

UppStART is a Swedish study that aims to examine the short- and long-term effects of assisted reproduction. Several clinics in the Stockholm and Uppsala region, including the Carl von Linné Clinic have chosen to participate and are involved in collecting data for this study.

Here you will find more information (available only in Swedish) about UppStART and you can also go to the UppStART website.

Ten years of research at our clinic in collaboration with UCR and the Department of Mathematics at University of Uppsala, has resulted in several so-called prognosis models. Briefly, these give us a unique opportunity to evaluate a couple's chances of success in IVF, both before a treatment and also when the fertilized egg is to be selected and inserted into the uterus. The latter model has been used consistently by the clinic since completion in 2003. This unique model allows us to rank and select embryos so that the chance of pregnancy is maximized and the risk of a twin pregnancy is minimized. This has actually improved the percentage of embryos that result in a pregnancy and child. The number of embryos that can be frozen has also increased. The pregnancy rate per egg retrieval remains high.

The twin rate is now the lowest in the country and probably in the world. Is this good? Wouldn’t you want twins after having tried for so long to have children? Well, many feel that way, but most change their mind when they learn about the risks for twins. Twin pregnancies have a fourfold increased risk of cerebral palsy and at least double the risk of a child dying during pregnancy or after childbirth. We have now shown that these risks can be minimized. Since the new prognosis models were introduced, we have diminished the "normal" risk of complications in IVF pregnancies. More children are born healthy. We have lectured about these models in many other countries and four other Nordic clinics have tested the models with great success. The first paper on the subject is published (Construction of an evidence-based integrated morphology cleavage (IMC) embryo score for the implantation potential of embryos scored and transferred on day two after ovum pick-up., Holte et al, Hum Reprod 2007; 22, 548-57).

Our prognosis model can be used by one of our affiliated gynecologist who can access it before treatment. S/he can combine data from an ultrasound examination and hormone tests to give more accurate advice than was previously possible when counseling couples. Read more about this under Results.

Below, you can read the first presentation of embryo prognosis model, a press release in connection with the annual Swedish Doctors’ Medical Conference (Läkarstämma) in 2003. The lecture was awarded the honorary award by the Swedish Society of Obstetrics and Gynecology.

"Twin pregnancies are burdened with higher complications than singletons and the high frequency of twin pregnancies from in vitro fertilization (IVF), about 25%, is therefore a problem. However, a general reduction in the number of transferred embryos from two to one will most likely result in a substantial reduction in pregnancy rate. In order to find the optimal balance between pregnancy and twin frequency, a better knowledge of the individual embryo's chance of implantation is required. Additionally, an improve understanding of which background characteristics of the couple will predict high pregnancy chance and high twin risk is essential. Evidence-based embryo assessment has been notoriously difficult to obtain because of the traditional of returning more than an embryo. If more than one embryo is transferred and the result is a singleton, one cannot know which of the embryos resulted in the pregnancy.

The following results are the fruit of an ongoing collaboration between the Carl von Linné Clinic in Uppsala, one of the largest Nordic IVF clinics, Uppsala Clinical Research Center (UCR) and the Department of Mathematics at Uppsala University.

We began with a three year prospective study. Each transferred embryo was characterized according to a standardized protocol. Five different properties of the embryo were assessed and graded (number of cells, number of cells with a nucleus, degree of so-called fragmentation, any size variation between the cells and the rating of the symmetry of cell division). All treatments with two transferred embryos were evaluated and only the treatments that resulted in either a twin pregnancy or no pregnancy were included. Thus, only treatments where the individual embryos fate was entirely known were the basis for the analysis. The statistical analysis (regression analysis) showed both that only three of the studied characteristics of the embryo affected its implantation potential and also the relative importance of these properties. The statistical validity of the model could then be confirmed using those treatments which only resulted in a singleton pregnancy. The results were summarized in an equation, in which an embryo’s implantations potential is summarized in a 10-point scale.

The second step was to evaluate which of the couple’s background factors are crucial for single or twin pregnancy. About ninety variables recorded in connection with the treatments, such as age, smoking, previous pregnancies, semen sample quality, etc., were tested and compared with each other in a statistical analysis. The results showed that, in addition to the score of the embryo, three variables were found decisive for the outcome of the treatment and can be used to predict the chance for pregnancy and twin risk. The variables that were found crucial are all easy to measure and were summarized in an equation that can be used to figure out the couple's chance of pregnancy and twin risk. The variables were, besides the embryo score (see above), the woman's age, ovarian sensitivity to the hormone given before egg retrieval (measured as the number of received eggs / total dose administered hormone (FSH) and the number of previous IVF attempts, including possible pregnancy at a such attempt.

In the third stage, we tested the model's ability to predict single and twin pregnancy. The current figures from the autumn of 2003 indicate that the model can guide the clinician regarding the number of embryos that can safely be transferred in each individual case. This resulted in an unchanged number of pregnancies and significantly reduced the number of twins. "

When the models were evaluated recently, we found a very strong correlation between predicted treatment outcome and the actual results. For each 5% interval in the expected pregnancy chance, the actual results matched. For example, if a group of patients should have 45-50% chance of pregnancy, according to the prognosis model, the actual results for that group were similar (45-50%). This is illustrated by the bar chart below. The expected twin rate is also seen. The HFEA (Human Fertilisation and Embryology Authority, the British regulatory body for assisted reproduction) has shown interest in our prognosis model and Jan Holte was invited to lecture at HFEA’s annual meeting. The consensus in England is that something must be done urgently to reduce the risks of multiple pregnancies after IVF. 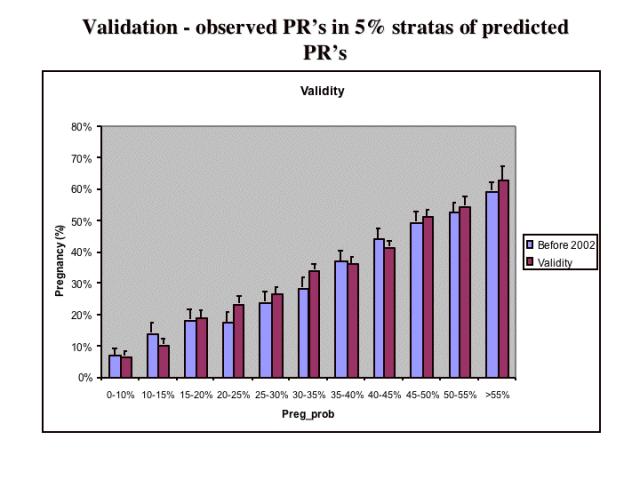 If you want to read the three recent papers that our models are based on, written by Felicia Franzen, Nermin Hadziosmanovic and Helena Pettersson, so please visit the following web pages:

The first week in July 2011, the annual European Congress for IVF and infertility research, ESHRE, was held in Stockholm. The Congress is now the world’s largest with over 8,000 participants. Our report on the Carl von Linné Clinic’s prognosis model for selection of the number of embryos to transfer was selected as a lecture and was also highlighted at a press conference. Media interest all over the world was very pronounced. This was the first time a model was presented showing that it has a high certainty of reducing the twin rate yet still maintaining the same high chance of having children compared with routinely transferring two embryos. Using the prognosis model meant that far fewer children were born prematurely or with low birth weight thus reducing their risk of suffering injury or disability.